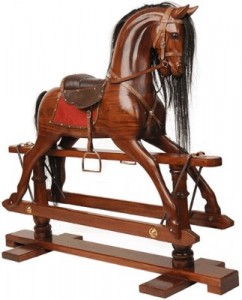 What Toys and Games Did Victorian Children Play

Not only in Victorian times but since the beginning of humanity toys of some type or other have been a part of children’s lives. We can only imagine what children used for toys in the earliest years of mans existence. A toy may have been no more than a rock or stick but it served its purpose of pacifying the child.

Sometimes a child’s curiosity or need for entertainment can only be satisfied with a toy. It is interesting to note that some of the earliest Victorian toys and games (or even earlier than Victorian times) resemble those that are used today. The game Quoits resembles ring toss and Skittles resembles bowling. You’ll learn more about these games as you read on.

It is important to note that Victorian Toys and Victorian Games were very expensive to buy in Victorian Times. Even wealthy children were allowed very few toys. Only the wealthiest could afford a Rocking horse like the one shown above. The cost of many toys at that time exceeded the average weekly pay that a father might earn. Educational toys were also very popular.

than they do in the modern era. There were no video games or computers to entertain children.  Sometimes a child’s imagination was his or her best friend. The poor Victorian children did not get new toys. Mothers would make dolls for the girls if they were lucky and toys were whittled out of wood for the boys. A tightly wadded piece of cloth could serve as a ball to kick around in the streets. Poor Victorian children would rarely have more than one toy and it was usually handmade or handed down through the generations. They would guard it with their lives…it was all they had!

This is a toy or exercise that is still popular today. We know it better as a Jump Rope but in Victorian Times it was known as skipping rope. Like today it was more popular with girls than boys.

Rich Victorian families would buy Skipping ropes with fancy hand carved handles but the poor families could easily make their own.

Automata toys were usually made of wood and had moving parts powered by a hand crank. The teacher and students in the Automata toy pictured would move at different intervals depending on the gear work located under the floor.

In a world without video games and the like, Victorian children would be fascinated for hours playing with this toy. It was mostly a toy for rich children but could be made by hand if the father of a poor family was good at working with wood.

In these modern days we that live in, video games such as Call of Duty, Assassin’s Creed and Battle field 4 have taken the place of playing with Toy Soldiers. But a young man in the Victorian age loved playing with toy soldiers. A boy in the 1800’s would use his imagination to carry out the many battles that his Toy Soldiers might face on any given day.

Marbles are still played with today but are starting to fade away a little. Marbles were a popular Victorian Toy. You could play many games with marbles. Poor children usually had marbles made of clay while the rich kids might have marbles made from real marble.

As with all children from the olden days up to now there is a great desire to emulate their parents. They want to act grown up just like their parents. That’s why the miniature toy Tea Set was so popular with young Victorian Girls. They could gather their friends around a table and have a nice little tea party of their own, just like their mother.  Miniature Tea Sets were a toy that rich Victorian Kids played with for the most part.

Although this toy/game looks very simple, it was very popular. The object of the game was to keep the hoop rolling as long as possible. Children played this game outside and many times it would be played as a competition between several children to see who could roll the hoop the farthest.

Pictured to the left is a Victorian Age Kaleidoscope. A child could look through one end and see a brightly colored design at the other end. As the child would twist or shake the Kaleidoscope and the psychedelic design would change into another design and the more it was repeated the more it would change. This was a fascinating toy for a child in those days. At the bottom of the page is a video of what one might see while looking through a Kaleidoscope. 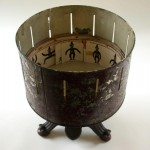 One might say that this was actually the beginning of movies and eventually television as we know it today. Actually some of the early Disney cartoons were made using this principle. There were other names for moving picture toys such as Phenakistoscope, Thaumatrope, Cinematrope and Praxinoscope. They would usually come with extra cardboard or paper inserts so a child could change the moving picture inside. The video at the bottom of the page will explain what a Zoetrope is better than I can put into words here.

Obviously this is one toy that has been around for a long time and will be around for many years to come. It seems that at a very young age almost every little girl acquires the desire to copy their mother and care for a child or at least a good substitute for one. A doll fills that need quite well. China Dolls became popular during the Victorian age.

One reason for that popularity might have been because it was said Queen Victoria had a large collection of China Dolls from her childhood. China Dolls were very expensive and were typically owned by rich children. Dolls owned by the poorer class of children were usually handmade.

There were no cars in Victorian times so horses were the main source of transportation. This made the Hobby Horse or Rocking Horse very popular. Wealthy Victorian Children could afford the expensive rocking horse while the poorer children played with a Hobby 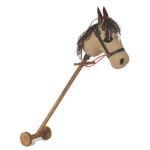 Horse. A Hobby Horse could easily be made by hand considering the body consisted of a wood pole or dowel rod. Sometimes wheels could be affixed to the lower end of the Hobby Horse so a child could roll it around and not just drag the wooden end along the ground. Even though they were much cheaper, Hobby Horses had the advantage of being mobile and could be used inside or outside while the rocking horse had to stay in one spot while being ridden and usually inside.

The Whip and Top 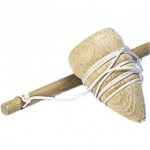 The predecessor to the spinning top, a Whip and Top consisted of a cylinder type object (The Top) with a pointed bottom and a stick with a string or piece of leather tied to the end(The Whip).  A child would set the top to spinning by wrapping the string around the top and give the stick a pull. This would make the top spin at a high rate of speed. The child would keep the top Spinning by whipping it on the sides with the string or leather strap. Hence the name.

Spinning Tops were actually just a simplified version of the whip and top. Spinning tops where set to spinning by using ones fingers to spin it.

Yo-Yo’s did not become popular until the early 1900’S but they were used by many children in the Victorian Days. Yo-Yo’s are known to have existed as far back as 500B.C. Today there are professional Yo-Yo’ers who compete all over the world.

Ring toss or even Yard Jarts most likely evolved from Quoits. It was a game that had anywhere from one to 9 poles or pegs and several rings. The rings were usually made of rope. As with ring toss the object was to through the rings over the pegs to score points.

As we have learned, a lot of the Victorian toys and Victorian Games involved the child’s desire to emulate or copy their parents or grownups in general. Toy Theatres were no exception. While the parents were going to the Theatre children were pretending with their toy theatres. Toy Theatres were copied after the grown up theatre shows of the day.

This toy originated in China but became very popular in Great Britain in the 1800’s. It is made of a spool type object and two sticks with a string tied to each stick. The goal was to throw the spool in the air with the sticks and string and catch with them. There were many tricks that could be perfected with a lot of practice.

These toy trains were not made popular until the latter part of the Victorian era. A company called Marklin was the first to make complete toy train sets out of soldered tin. A basic toy train set could be bought and then additional parts and sections could be purchased to add to it as time went by. Sadly, Poor Victorian Children could only dream about owning a Clockwork Train.  Only Rich Victorian Families could afford one.  Model train sets didn’t really reach its height as a hobby until the Edwardian era, circa 1901 or later.

According to Wikipedia, Skittles is a predecessor of many of the games of today, such as, bowling and lawn bowling. In the Victorian era this game was typically played outside but had indoor variations as well. It is still a popular indoor pub game in some areas of the UK and United States.  It consisted of a round hard ball and several Skittles, usually around nine. The object of the game was to roll the ball and knock down as many skittles as possible. Although wealthy families could buy fancy and extravagant Skittles sets, this game was played by the rich and the poor since it could easily be made by hand.

Variations of this football and/or soccer have been around since between 2500-5000 B.C, and leather or animal skins have been used to make them just about as long. Football was played on the lawns or in the streets by all classes of people. Yes, the rich children could own a fancy professionally made ball but the poor children could easily make their own.

Books were a great source of enjoyment for Victorian Children, rich or poor. One might not consider a book to be a Victorian Toy or a Victorian Game but children in the 1800’s loved them. They would read them over and over.