Victorian Child Labor was the norm in the 1800’s. There was no such thing as Child Protective services like we have today.

There were laws that were passed over a period of several decades that slightly improved the working conditions and treatment of children. It wasn’t until people like Lord Shaftesbury and Thomas Agnew took action that true change took place.

What Jobs Did Victorian Children Perform?

Victorian Child Labor was prevalent in the Victorian Era. Here is a list of several types of jobs that children did.

As you can see Victorian Child Labor covered a broad spectrum of occupations. To cover all of them in this article would be a monumental task to be sure. However, we will look into some of the more prevalent jobs that children did in Victorian times. 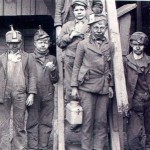 Steam was the number one source of energy during Victorian times. Steam powered everything from trains and steamships to factories that used steam to power their machines. In order to make steam you must have water and heat. To provide heat they had to burn coal, and lots of it. Therefore coal mines used a large part of the Victorian Child Labor force in the 1800’s.

The thought of using children for working the coal mines was very attractive to mining companies. Children were much smaller, enabling them to maneuver in tight spaces and they demanded a lot less pay.

Working Conditions in the Mines

One of the on the job aspects of Victorian Child Labor was the dreadful working conditions. This was particularly magnified in the coal mines. It 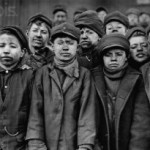 was dark in the mines making it hard to see and at times would cause permanent problems with sight from the constant strain on the eyes.

Due to a lack of proper ventilation, coal dust was very thick in the air. Considering that Victorian Children would work from 12 to 18 hours a day it is easy to see how respiratory problems could arise. There was constant noise, and rat infestation was very common in the mines.

Some children developed permanent spine deformation from having to walk stooped over constantly. Explosions or cave-ins were an ever-present fear.

Due to the lack of safety awareness in the mines and all of Victorian child labor for that matter, Death was a constant and ever-present danger. The Durham Mining Museum website has several lists  of mine disasters with names and ages of the casualties. You can view them yourself by Clicking Here.

[learn_more caption=”Click Here”] 1781 James Watt’s rotary steam engine invented, this could be used to lower miners down a shaft or to pump water out of a mine.

1794 James Buddle’s exhaust pump was invented. This could draw stale air out of a mine.

1833 Factory Act, this banned children from working in textile factories under the age of nine. From nine to thirteen they were limited to nine hours a day and 48 hours a week.

1836 Registration of Births, Deaths and Marriages, this enabled factory inspectors to check the ages of children working in factories (only applicable in England and Wales).

1842 Publication of the ‘First Report of the Children’s Employment Commissioners: Mines and Collieries’, which had been prepared by Lord Ashley (later Lord Shaftesbury).

1844 Factory Act, this classed women as young persons under the age of eighteen and limited the hours of both groups to twelve on weekdays and nine on Saturdays.

1847 The Ten Hour Act, this cut the hours of women and the under-eighteens to ten a day and 58 a week.

1850 The Ten Hour Act, this set the working day for all workers at ten and a half hours. 1867 Factory Act, the legislation was extended to all workshops with more than 50 workers.

Here are four articles taken from the National Archives. It gives you a rare look into what Victorian Child Labor was really like in the mines.

The life of a chimney sweep in Victorian times was nothing like what you see in Mary Poppins. It was a brutal, dreary existence for Victorian child chimney sweeps. Some were as young as 3 years old. Their tiny size made them a popular choice for going down the narrow chimney stacks.

A Victorian Child Chimney Sweep may have been the most dangerous job for children in the 1800’s, especially when the child first started doing the job. Being sent down the chimney the first several times would cause the child’s arms, elbows, legs and knees to be rubbed and scraped raw. At times their knees and elbows looked like there was no skin at all on them. The boss would then wash their wounds with salt water and send them down another chimney without sympathy.

After a time the child would develop calluses making their task a little more bearable. But the dangers of the job were only beginning. Falling was 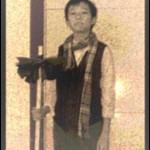 a major fear for chimney sweeps or getting stuck in the stacks also, both could cause death very easily. The constant breathing in of soot caused irreversible lung damage in many children. There were a few reported cases of children getting stuck in chimneys and no one even knowing it, leaving them to die alone from exposure or smoke inhalation or worse. I will leave it to your imagination about how terrifying that must have been. The lifespan of Victorian Chimney sweeps rarely made it to middle age.

Victorian Child Labor Laws Against the use of Child Chimney Sweeps

In 1788 a law against the use of young children under the age of eight as chimney sweeps was enacted. Furthermore, the master sweep had to offer proper clothing as well as decent living conditions and had to allow the children to go to church on Sundays. Before this act children as young as 4 years old were being used as Victorian child labor.

The Chimney Sweepers and Chimneys Regulation Act of 1840

Children as young as six were still being use to sweep chimneys. Under this act it was not legal to make someone or even allow person under the age of 21 to climb up or into a chimney for the purpose of cleaning it.

In 1875, a 12-year-old boy name George Brewster died in an accident after his Master Sweep made him climb the chimney at Fulbourn Hospital to clean it. A man called Lord Shaftesbury was obviously touched by the story and the spattering of public outcry that followed. He proposed a new Act that would superseded the Chimney Sweepers and Chimneys Regulation Act of 1840.

The Chimney Sweepers Act 1875 made sure that all chimney sweeps had to be registered with the police. Then their work had to be officially supervised. The guidelines of the previous acts would be enforced as well. 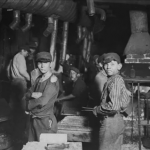 Victorian Child Labor was nothing new for Britain or all of Europe for that matter. Children had been used for labor for centuries. It was expected of them to help support their families. During the 1800’s awareness began to grow toward the ills of child labor in factories and elsewhere. Laws were passed and then amendments to those laws were passed until the use of children under the age of 16 years of age was prohibited for full-time work.

But up until these laws were passed child labor in Victorian times was rampant. Factory and mill owners saw children as cheap effective labor. They worked for a mere fraction of what an adult earned. And girls were even cheaper.  Because of their size and youthful energy there were jobs that children performed as good or even better than adults. Sometimes you would find more children than adults working at a factory.

At the factories children had no rights. The dirtiest jobs were given to the children. Many times a child would be told to clean under machines even while they were running. There were little or no safety measures put in place in Victorian times so the occurrence of an injury and even death was not uncommon. Victorian child labor consisted of very long working hours. The normal work week would be Monday thru Saturday from 6 A.M. to 8 P.M. Children would be beaten or fined for falling asleep, making a mistake or being late.

Leave a comment, we want your imput! Cancel reply