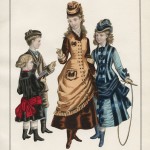 From the ever popular extravagance of the Victorian Dress for wealthy ladies to the basic hand me downs of the Poor Victorian children. As times changed so did the clothing styles.

The Victorian Ladies Dress, No Clothing Style in History is as Popular

A popular opinion of many historical clothing “experts” is that the birth of the Victorian dress with all of its pomp and flamboyance came about because the leading clothing designers of the day were men. Men that had a biased and possibly unattainable idea of what women should look like. Therefore you have such an outlandish style (By today’s standards) with exaggerated curves and unbearably thin waistlines. No consideration was given to comfort and practicality.

The long process and physical undertaking of getting dressed for an important evening of entertaining guests or going to a social gala would exhaust the average person before the festivities even started. The corset alone usually took two people to put on. The corset had to be very tight to accentuate or create a thin waist. It was not uncommon to see a woman pass out at a social event from not being able to breathe deep enough due to an overly tight corset. A great photographic example of the twelve step process a Victorian Woman had to go through to get dressed can be found HERE.

Children’s clothing evolved as time went by during the Victorian era . Many of these styles mirrored the adult styles of the day to some extent. There were some differences though.

For example, girls skirts might be shorter than the adult  skirt.Little girls skirts would go down to the knees. Then around ten years af age the length would be somewhere around mid-calf. Around the age of 16 a girls skirt would be full length down to the ankles just like their mothers. In fact, by this time the well to do young ladies would be dressing in the same fashion as adults.Until the late 1800’s girls were still wearing corsets.

By modern standards young Victorian boys dressed like girls. They mainly wore frocks and pleated skirts until the age of three or four. Sometime around the 1860’s the Scottish Highlander look became popular complete with plaid skirt and all. These were worn by boys between four and eight years old. Also at this time Victorian boys started wearing the Knickerbocker suit. A style most likely borrowed from the Americans.

In later years much like the girls, boys would wear smaller versions of what the adults would wear.

Menswear in the 1800’s was not as set in stone as the ladies wear. As you can see in the picture to the left, there are three men wearing three different styles.

A mans wardrobe began with the vest or waistcoat as they called it. The waistcoat could make or break the outfit. It was a lot like a mans tie is today. It accentuated the rest of  the mans clothing.

Another prominent feature of a Victorian mans wardrobe was his hat. Victorian Hats were a necessity for many men in Victorian times The two most popular were the Top Hat and the Derby or Bowler hat. You can view these in the slide show below or view several different varieties by CLICKING HERE. It will take you to a unique website that I found very helpful. You may even want to buy a Victorian era hat while there. ( I won’t get any commissions, I just thought it was a nice website and thought I’d share it)