The Vast Differences Between Rich and Poor Victorian Homes 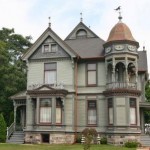 Keep in mind that families were

large in Victorian times, especially poor families. Some families had as many as eight to twelve children or more. The more children they had the more bodies there were to go to work and earn money. Sometimes more than one family would live in an apartment to split the costs. They could never dream of living in a nice big Victorian house.

Victorian Houses of the Wealthy

The wealthy Victorian Children and their families lived a much more elegant and privileged life than the poor families lived. The difference between upper class and lower class was vastly greater than it is today. Wealthy families lived in large Victorian houses three and sometimes four stories high with several rooms. They had more than one bathroom and even had flushing toilets.

They usually had servants that performed all the duties including cleaning the house, washing clothes and cooking supper. A nanny was hired to fulfill the children’s needs and was in many cases responsible for raising the children. The servants life was not anything to dream about but the servants quarters were still better than the poor families homes. Watch the slide show below to get a more vivid idea of a rich Victorian child’s home.

(Some exterior house photos are examples of Victorian style architecture and not actually from the Victorian era.)

Victorian Houses and Homes of the Poor

The poor Victorian Children lived in much smaller accommodations than the rich children did. It is hard to adequately put into words how bad the conditions were for poor Victorian children. The poor did not live in houses since property was next to impossible to acquire and the rich were the only ones who could afford to buy it.

Most poor families lived in small apartments. Some no bigger than one room. Sometimes two or more families would share an apartment. These apartments could be found in the very “ran down” part of town. They would be in buildings that were very close to or connected to another set of apartments.

These apartment buildings were not like the attractive apartments we have today. They were built very cheaply with little consideration for safety and attractiveness. There was no plumbing or bathrooms much less flushing toilets. Public outhouses were used by everyone that lived within the block. Sewage ran down the street since there was no underground sewage pipes.

The rendering to the left is an artists first hand impression of what a Victorian slum looked like. The squalid and unsanitary conditions that were brought on by immense overcrowding made life very dismal for poor Victorian children and their families.  East London had the most well-known slums of that time. The upper crust of society referred to the east side as the “darkest London”. London had slums in other areas also. The different slums were given names such as Whitechapel, Spitalfields, Bethnal Green and Old Nichol.

It was the general opinion of many of the wealthy Victorian families that the slums were brought on because of laziness, sin and lack of principle and self-discipline among the people who lived there. As the overcrowding and conditions of the slums worsened it was harder to ignore. The conscientious sector of society such as journalist, ministers and moral reformers debated accurately that the slums were brought on by a rapid growth in population and the explosion of industrialism during that time.

As I’ve stated before the differences between the rich and the poor classes were vast. As you can imagine this caused great curiosity among the poor about how the wealthy people lived. But a surprising aspect of society in the late 1800’s is that the wealthy upper class had their own curiosities about how the poor lower class lived. They would actually put on their “common clothes” and go down to the slums for sight seeing trips. “Slumming” became the name for this form of tourism.

Many of the upper class men and women alike would disguise themselves in lower class clothing and head to the slums for a night or two to indulge in the guilty pleasures that could be found in the streets and boarding houses of the slums. This mingling of the classes actually helped to lessen the upper and lower class barriers as time went by.

There were missionaries, social workers, charity workers and others who would visit the slums to help in any way they could. As time went by the national press caught hold of the story of the slums and the dismal life and existence of the people and brought widespread awareness and public sympathy to the problem.